I met Scott a few short years ago through mutual friends and cycling. We spend countless hours together putting the hurt on each other on the bikes, but when the pace slows down, we talk about life. I got to know Karen through Scott’s stories and discovered that she and my wife, Justina, have so much in common! I always told myself, “Ugh. I wish I’d known Scott and Karen before they got married. I would’ve loved to photograph them!”. The topic of Scott and Karen’s five year anniversary somehow came up during one of our rides and that was when I pitched the idea of a mountaintop vow renewal to them. Needless to say, they were totally stoked. 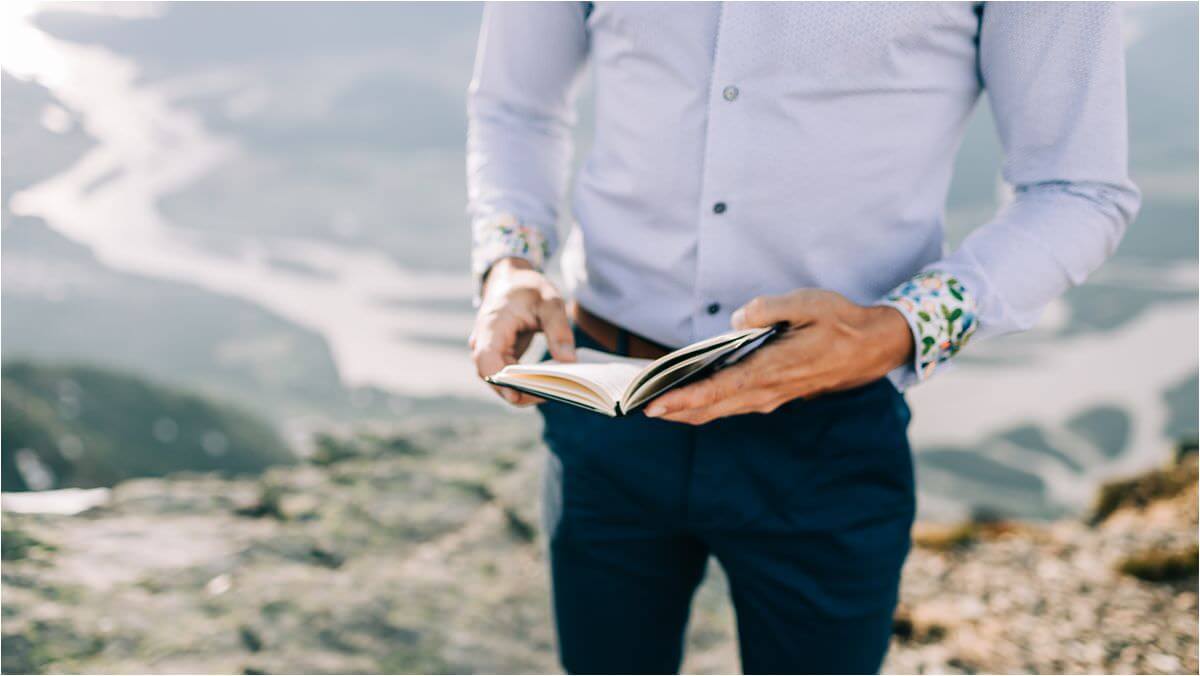 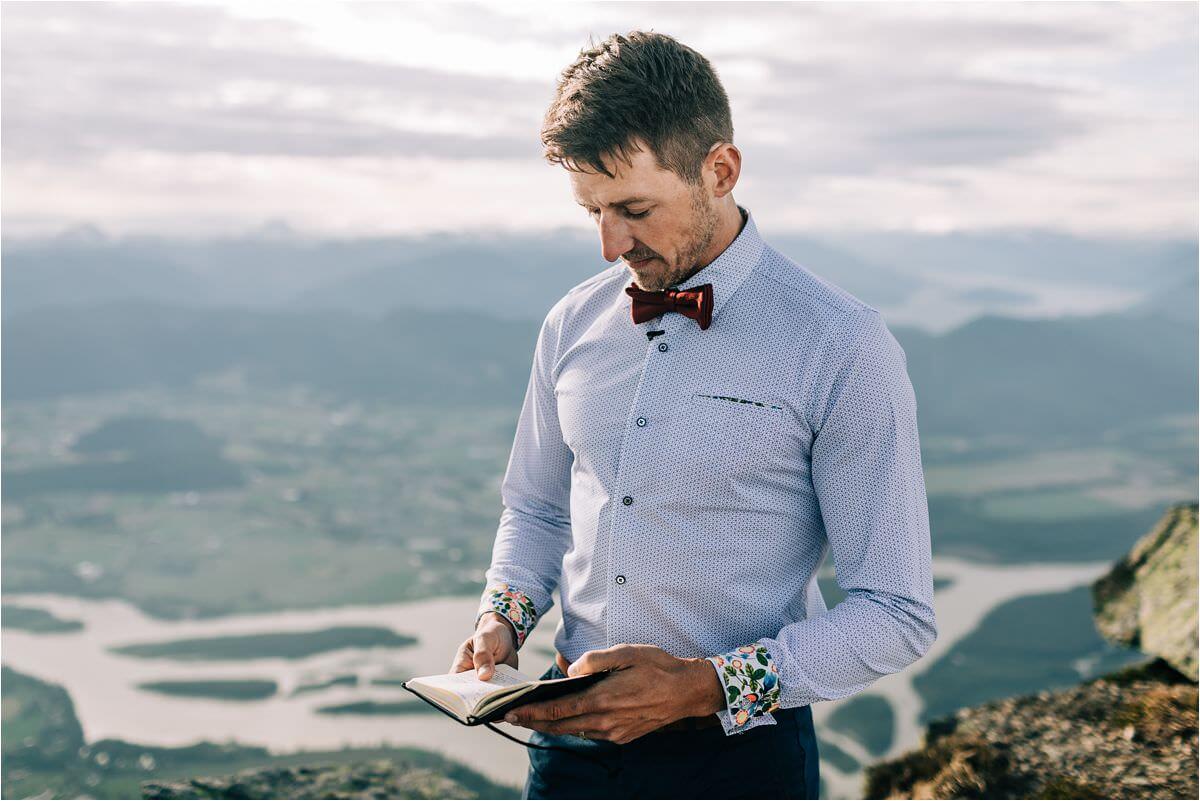 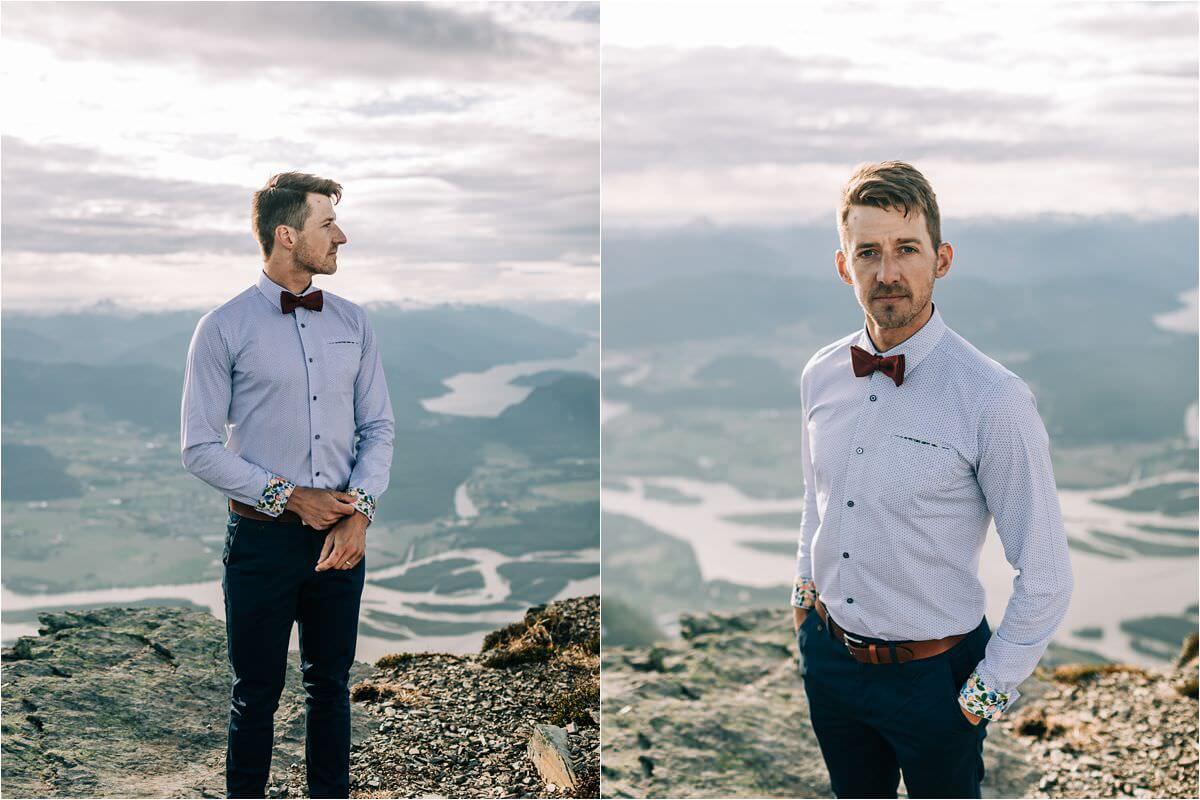 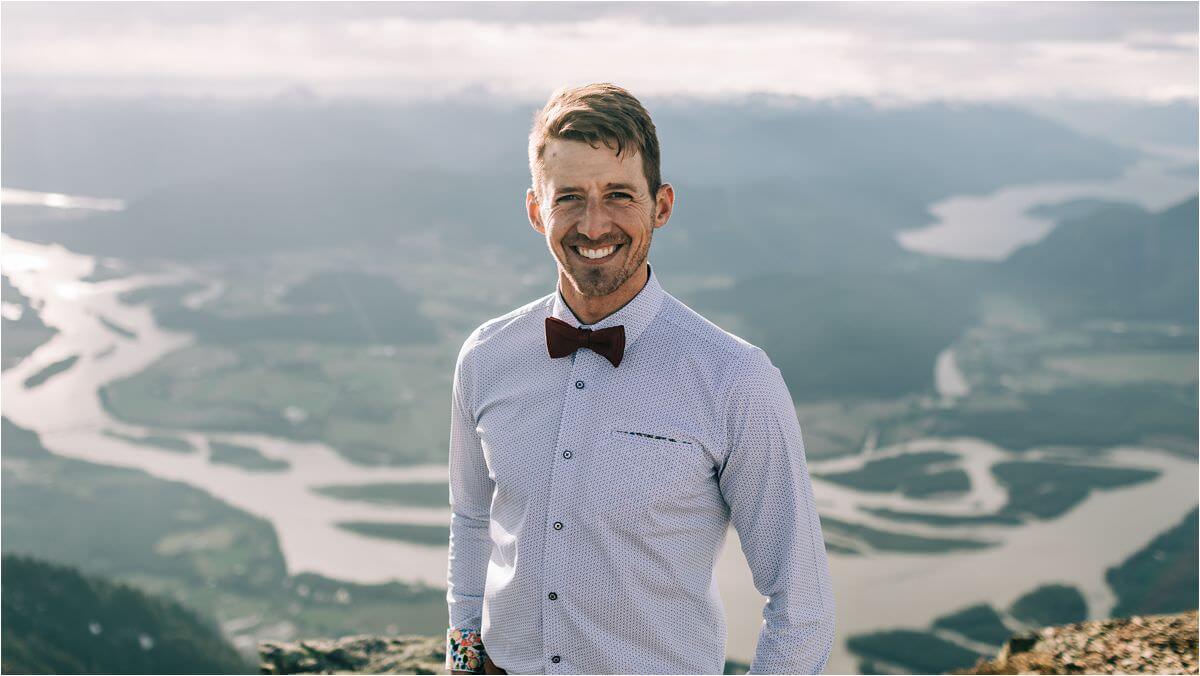 We created a Whatsapp group chat right away to start discussing shoot locations and we settled on Mount Cheam in Chilliwack. Cheam Peak was a spot that Justina and I had never been to, but Karen and Scott were quite familiar with it. The four of us met up for a rock climbing/beer session to hash out the details a week before the shoot – we were all so excited for this adventure! 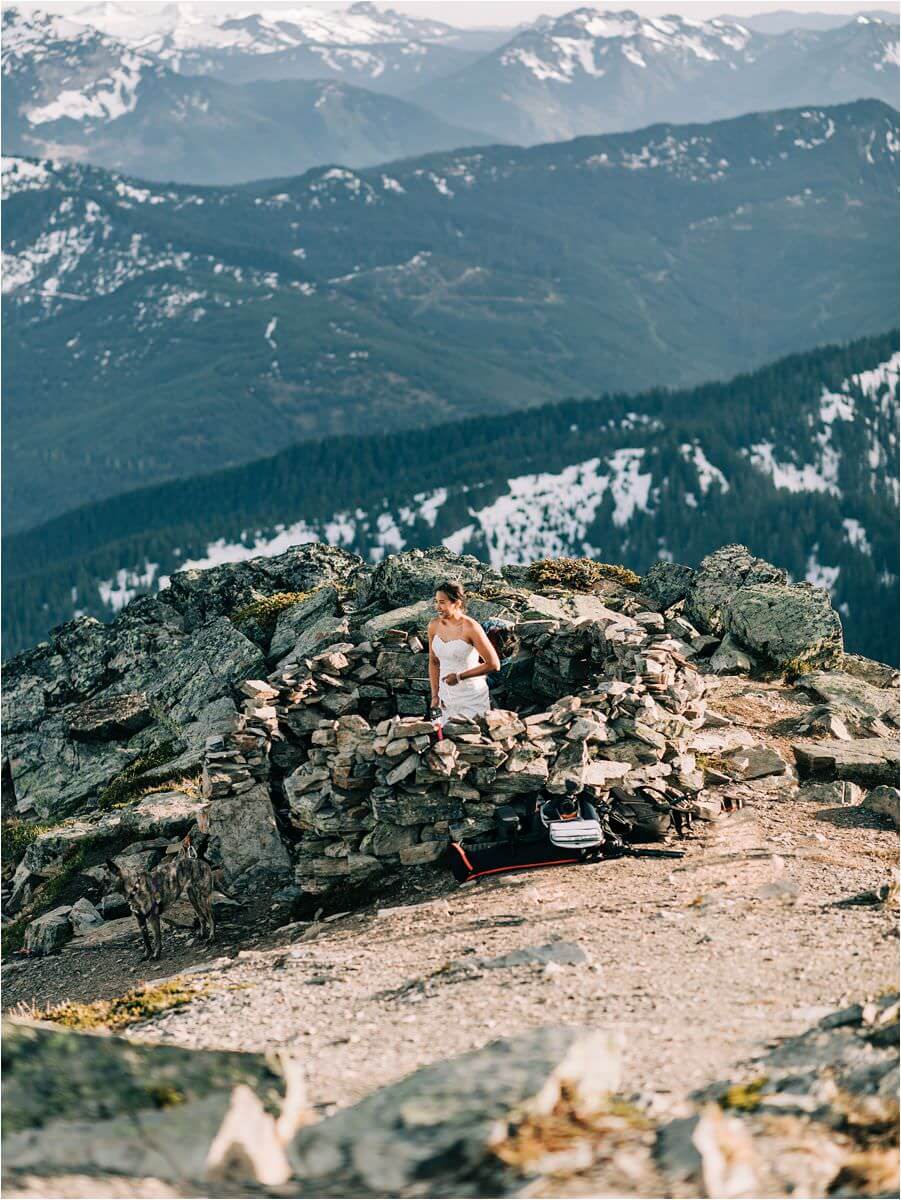 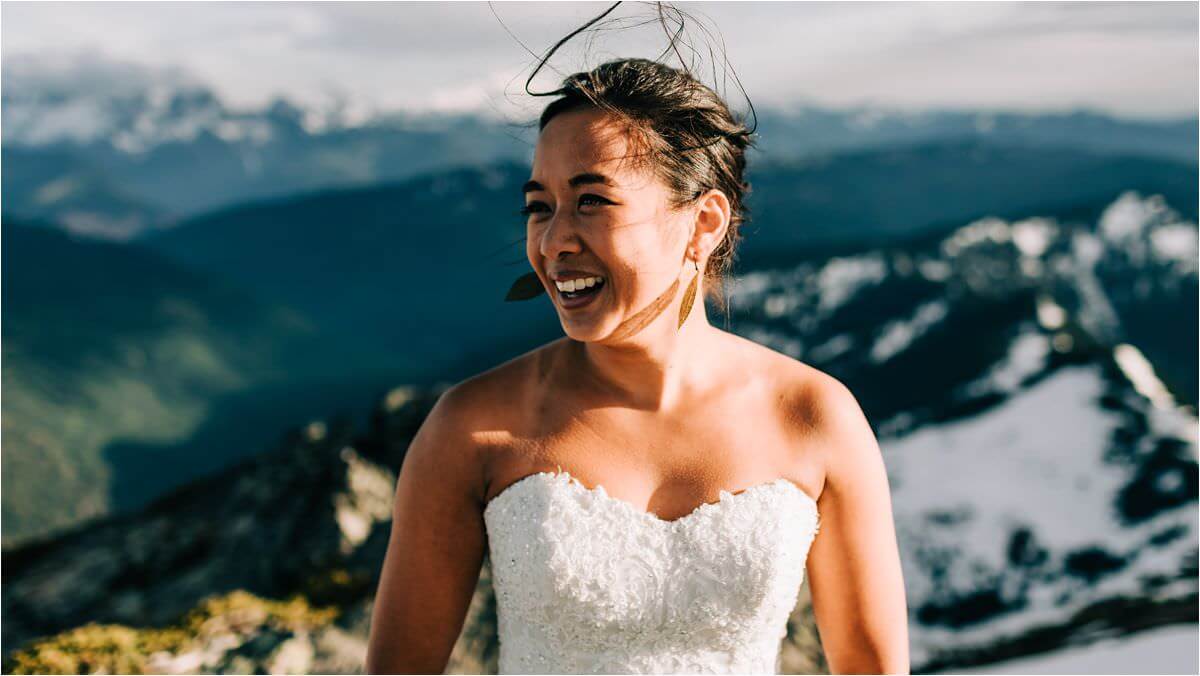 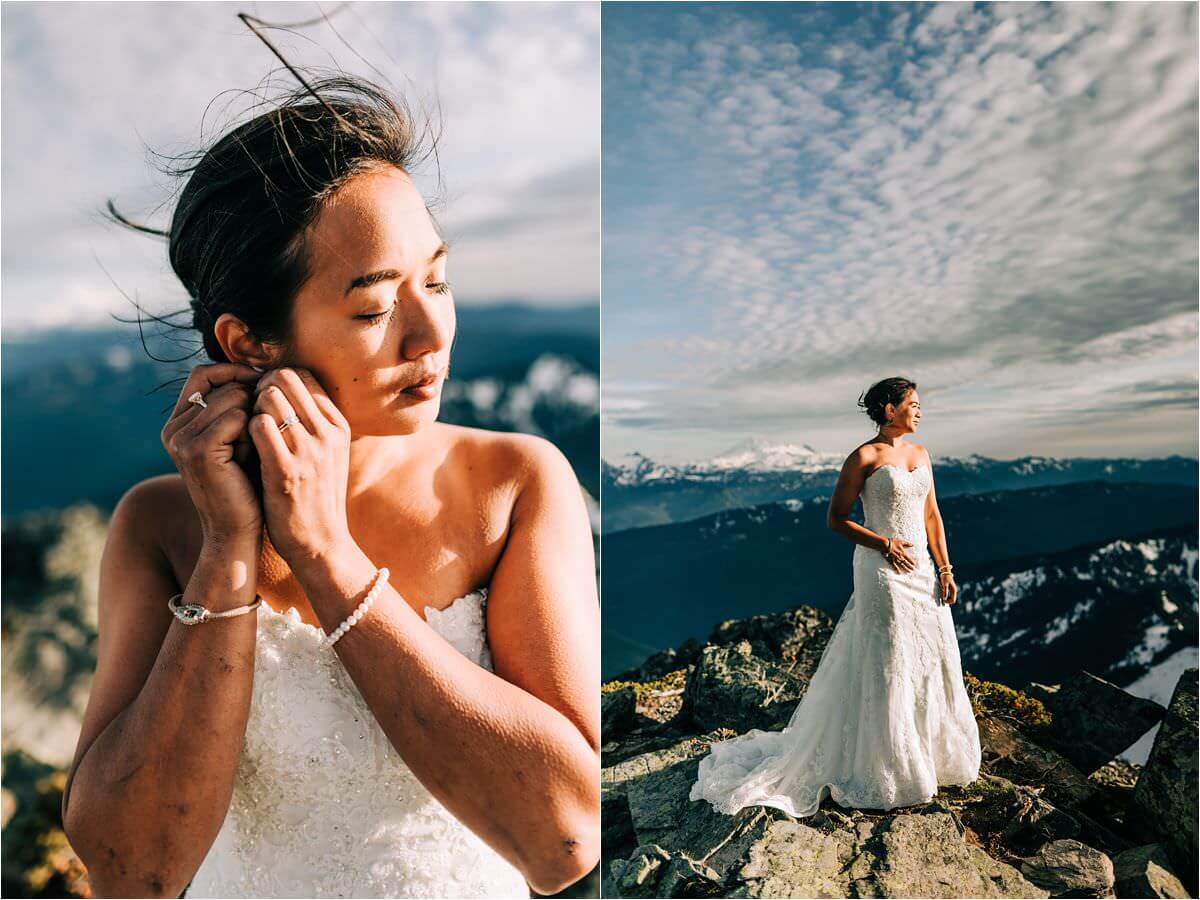 The trailhead to Cheam Peak is only accessible via a decommissioned forestry road and requires a 4×4 and expert driving skills so the four of us (and our dogs) hopped into Scott’s truck and made our way up the mountain. We planned for a sunset shoot on top of the mountain so we packed our camping gear as we knew it would be dark by the time we finished.

Being that it is late spring, it wasn’t long before we reached the snow line. Pro tip: bring cramp ons. They’re life savers!

A week prior to our shoot, the weather forecast called for heavy rain in Chilliwack. Luckily, the forecast cleared up, but we were heading into mountain territory and storm systems come and pass so quickly. On our hike up the mountain, things were looking quite bleak. There were dark storm clouds to the east, the peak was completely covered by cloud and we were hiking through light mist in the valley. As we got closer to the tree line, we ran into a few couples who warned us of some treacherous conditions ahead and low visibility. Scott was determined that the clouds would blow over so we gave it a bit of time and sure enough, they did! We reached the peak and were greeted with 360 degree views of the Fraser Valley and surrounding mountain ranges. 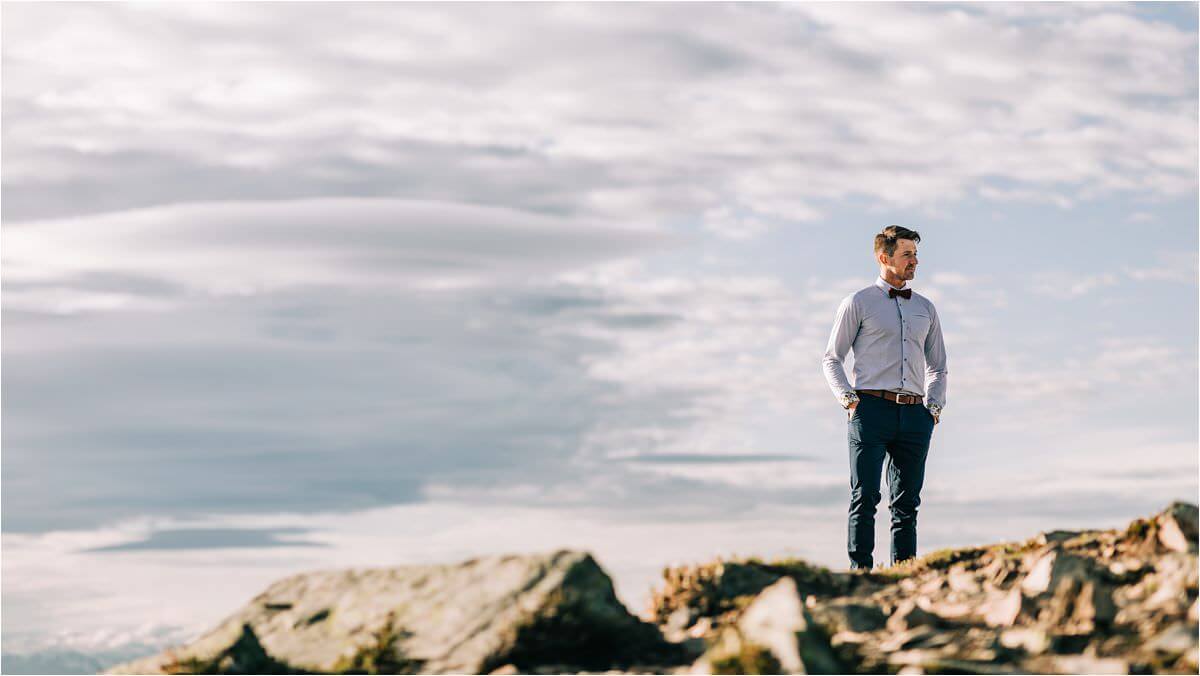 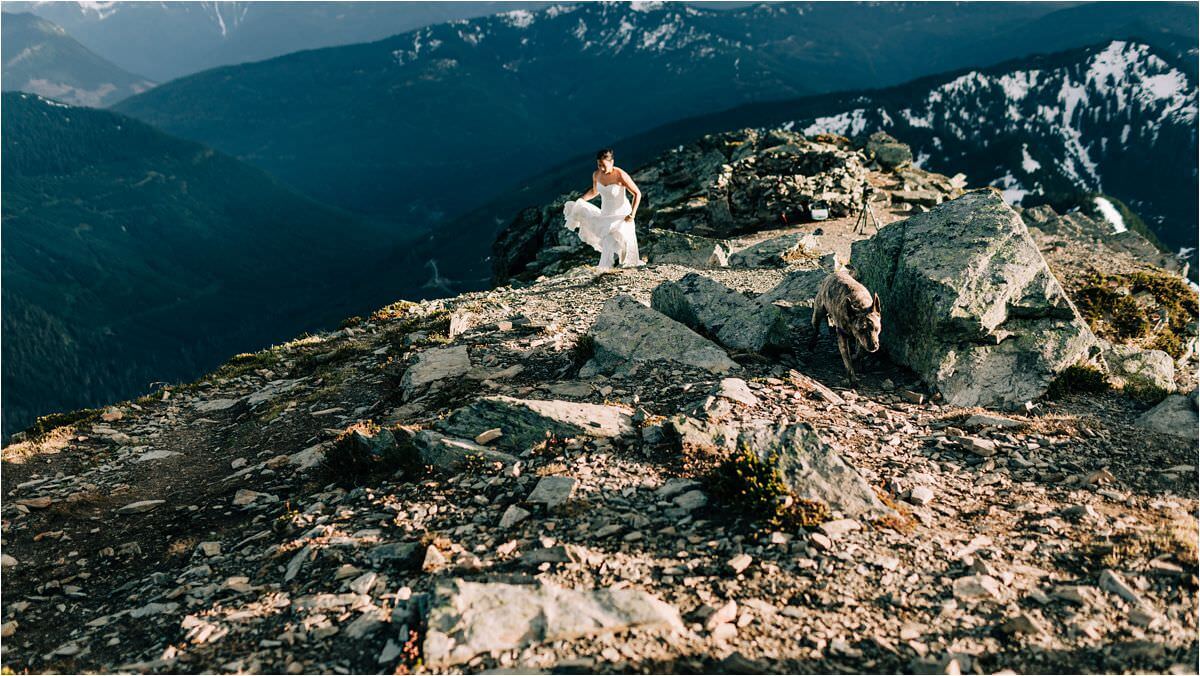 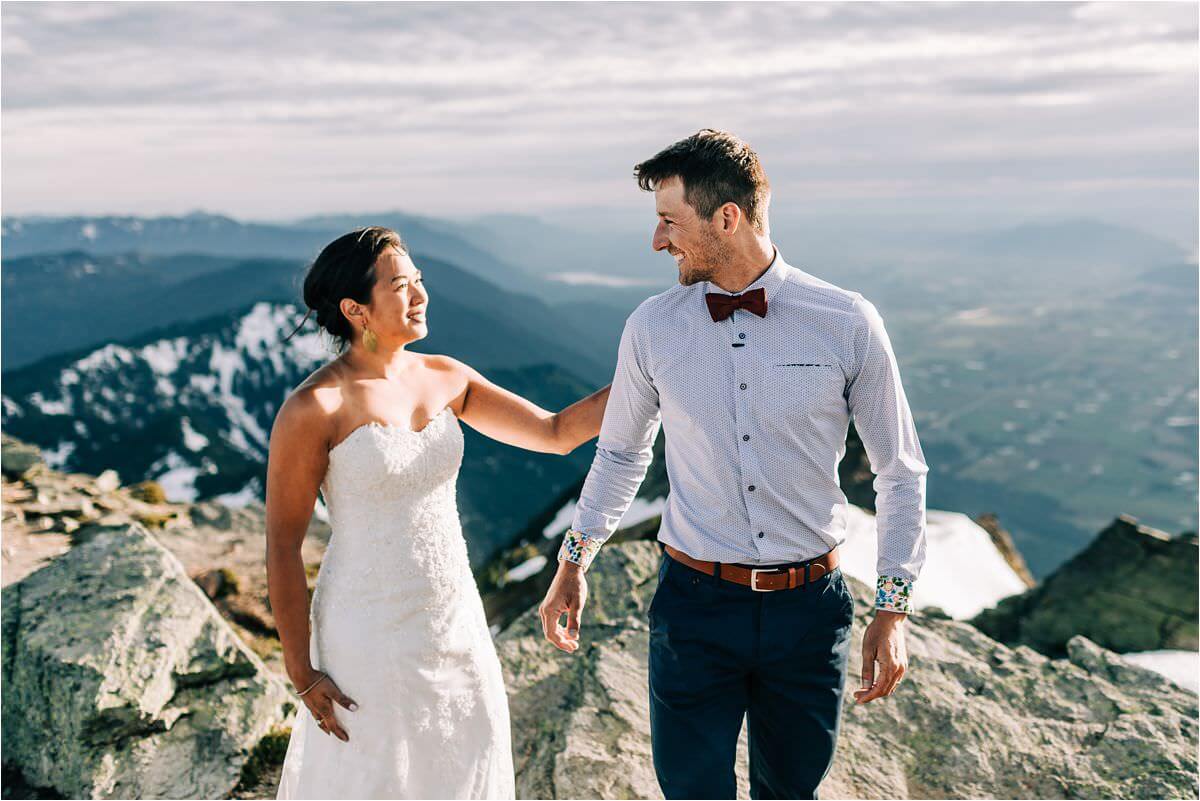 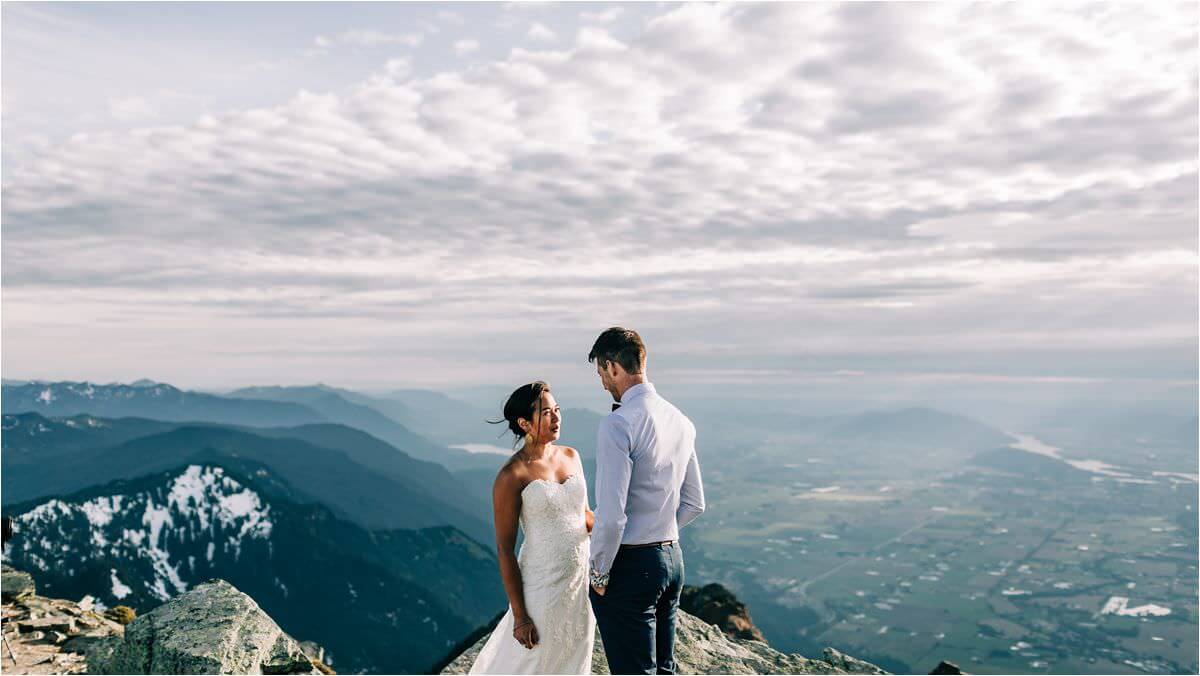 We arrived at the peak a bit later than expected due to the conditions (and because our dogs were being goofs). Justina and I set down our gear, we all had a quick bite of food, and we started scouting locations while Scott and Karen got ready separately. Meanwhile the dogs were whining and howling because they felt left out and wanted to explore… haha. 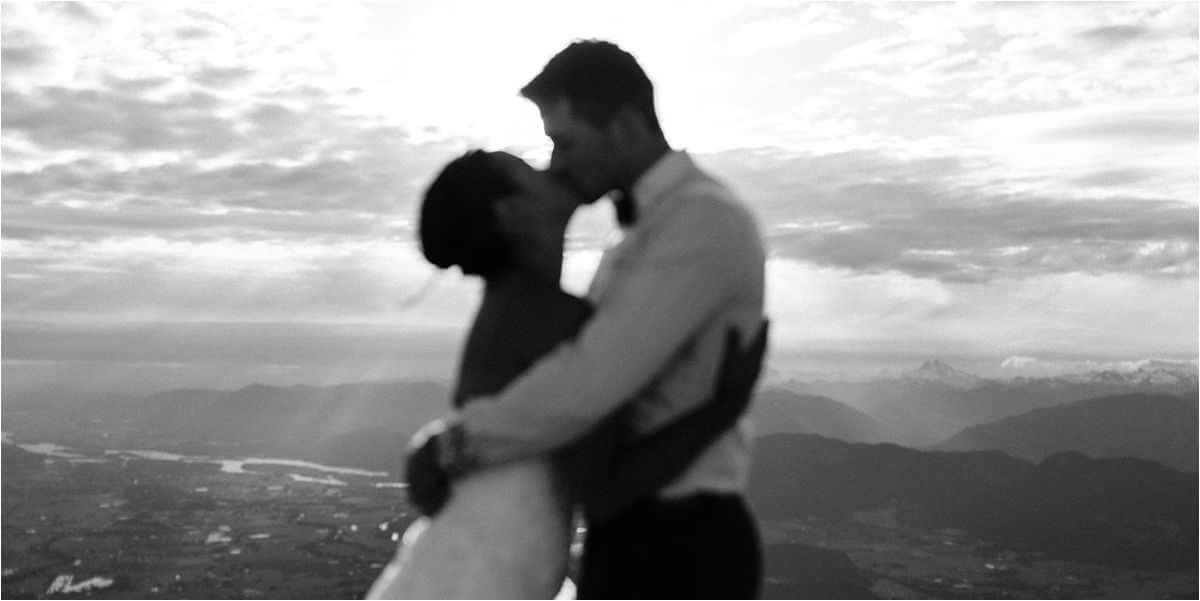 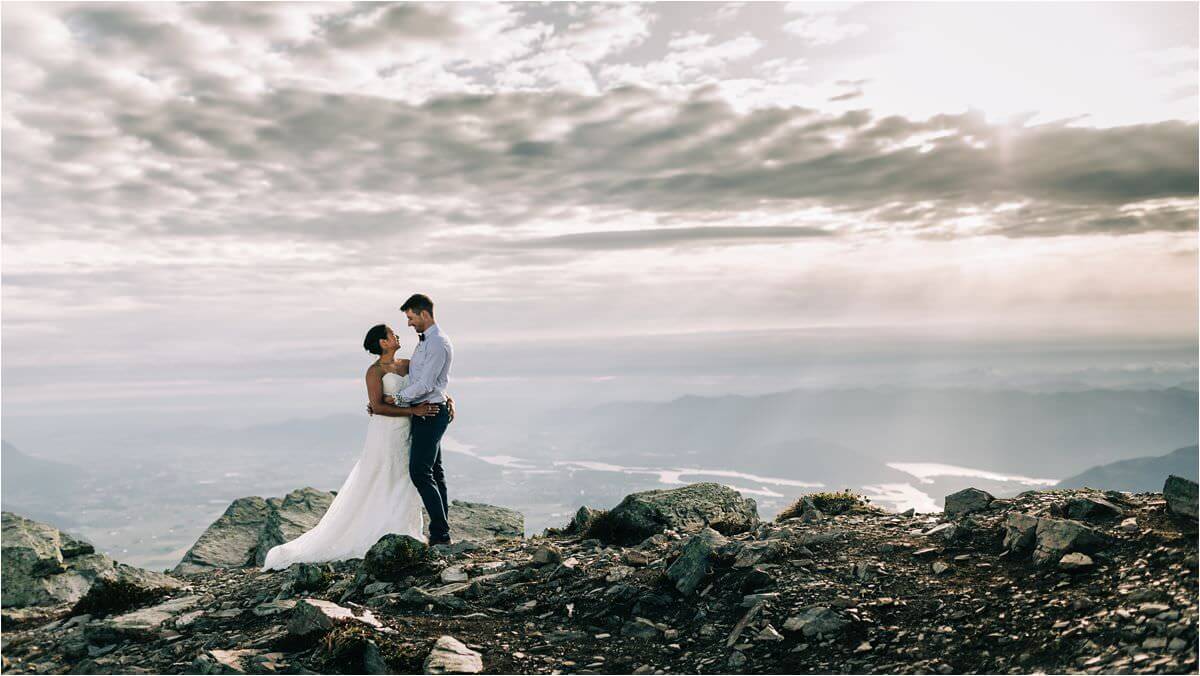 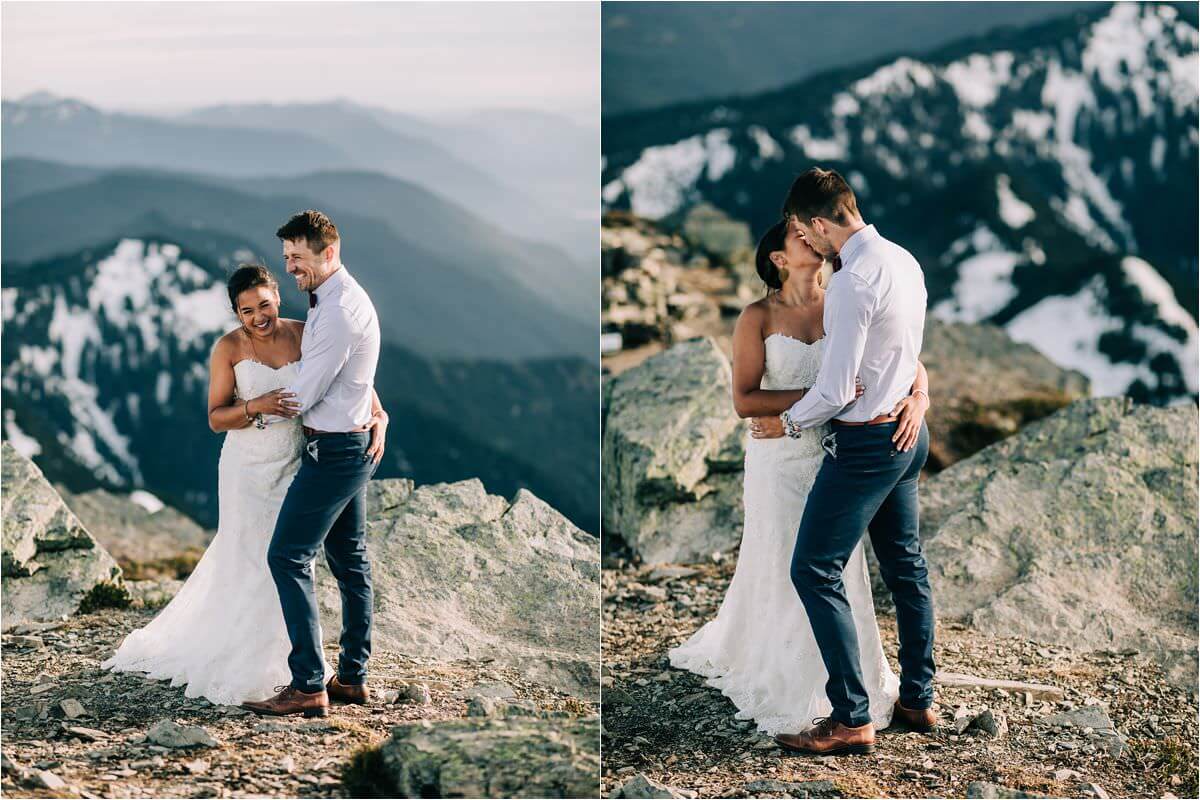 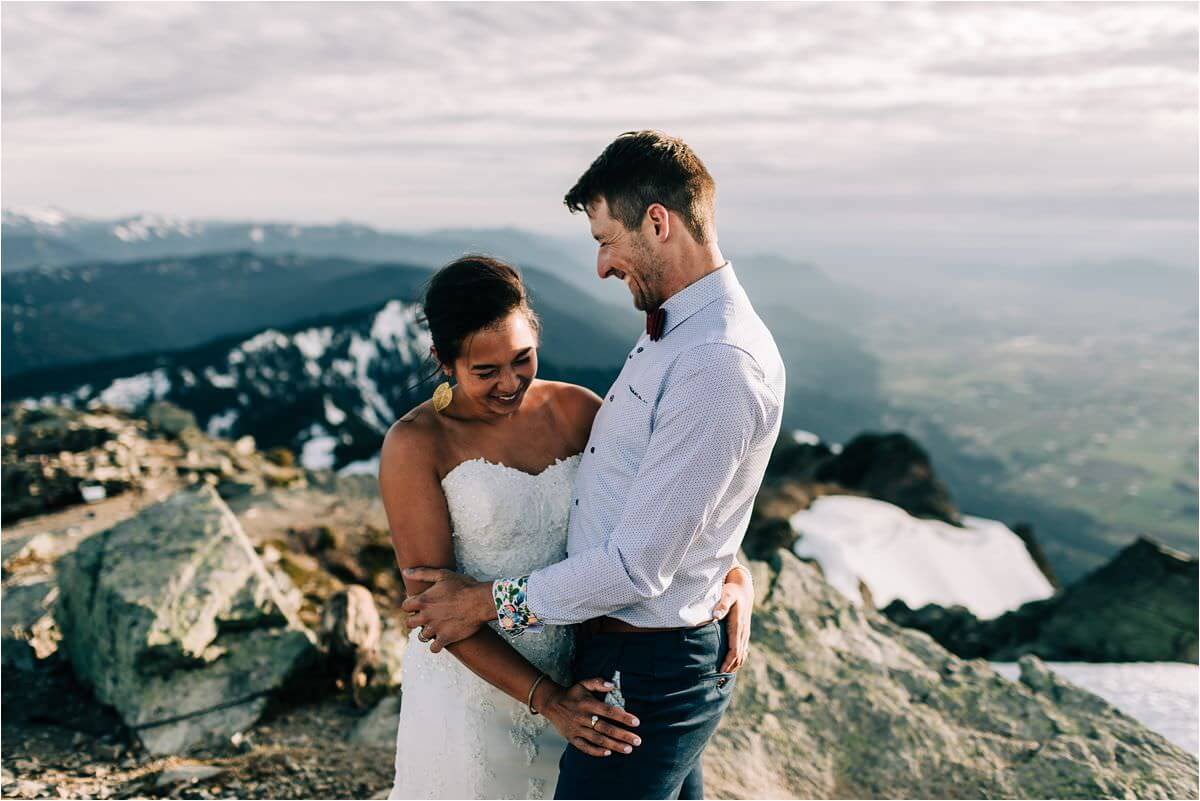 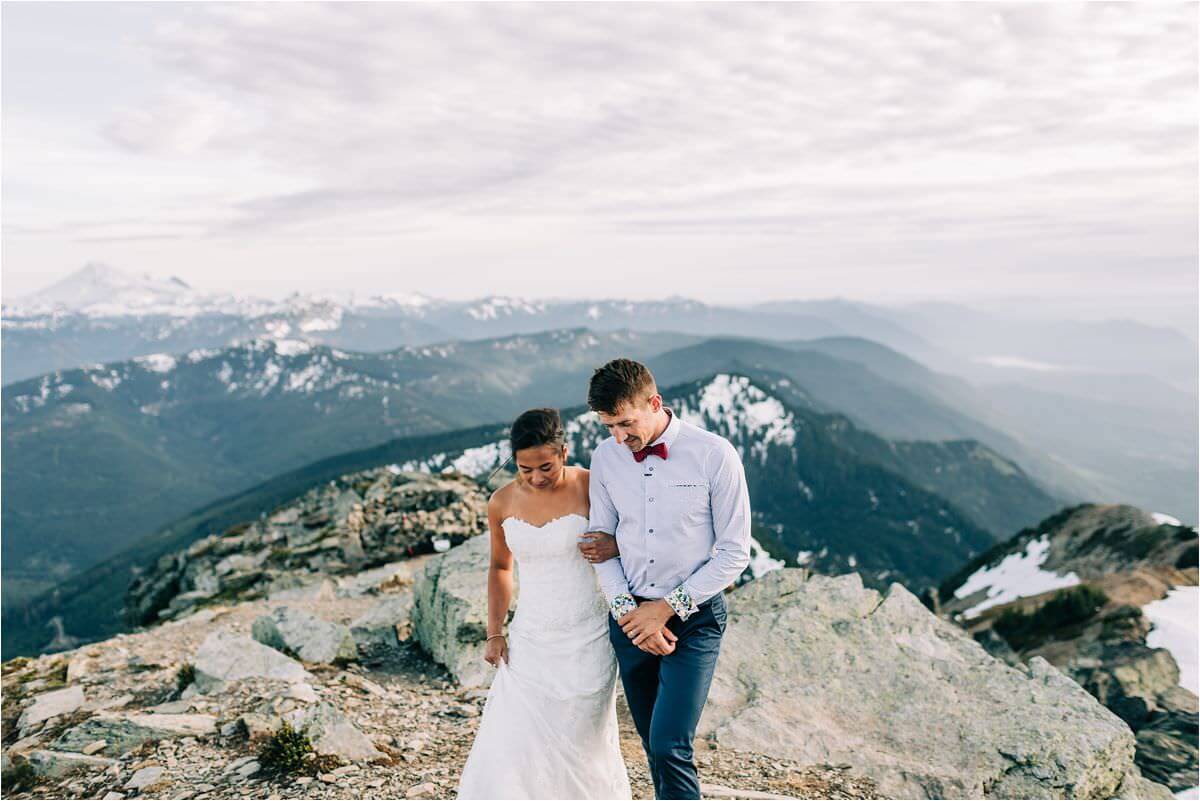 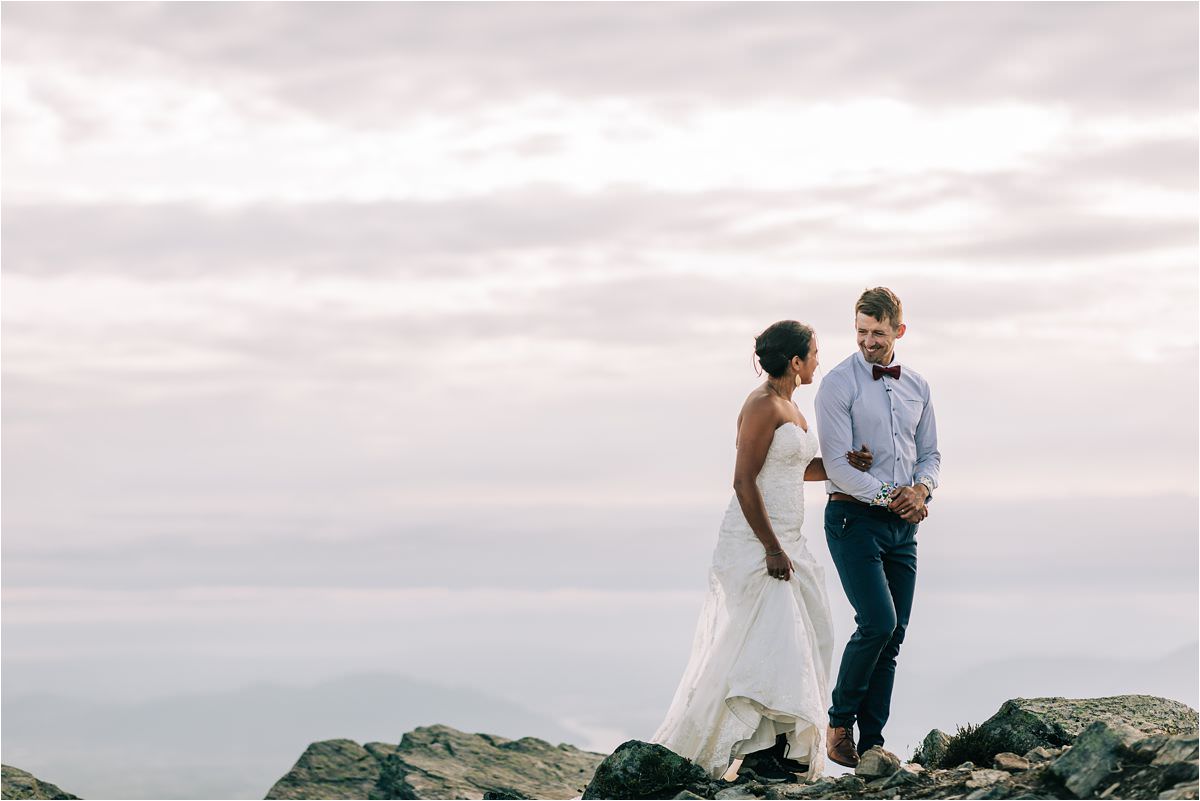 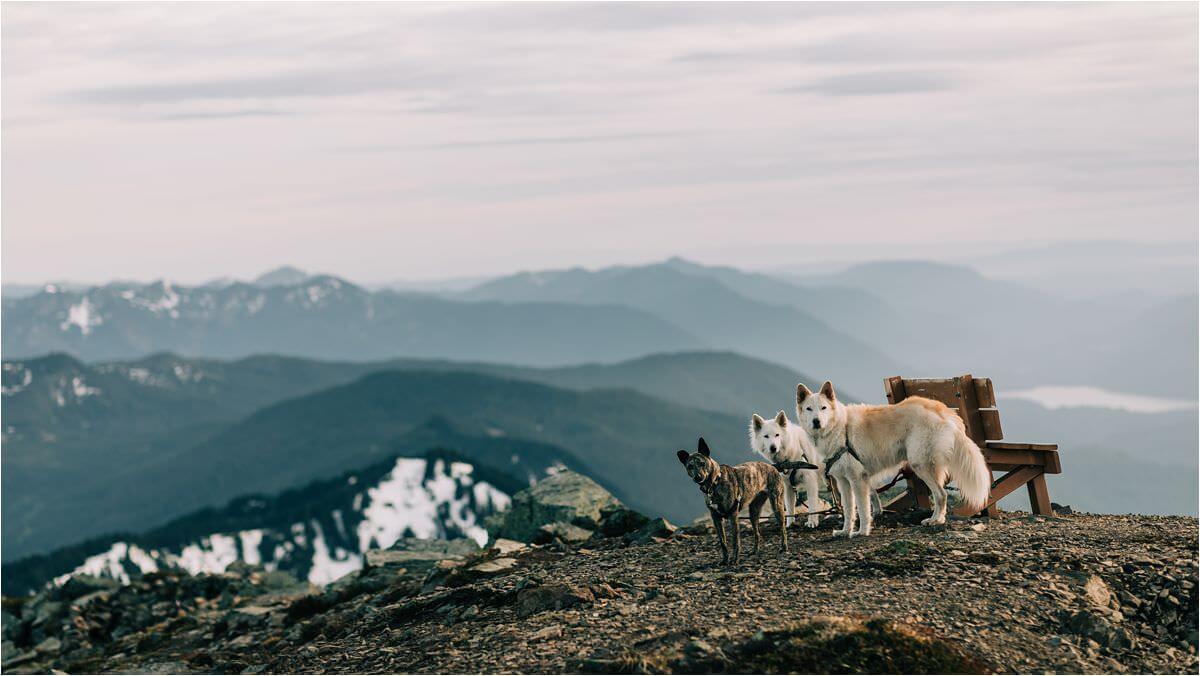 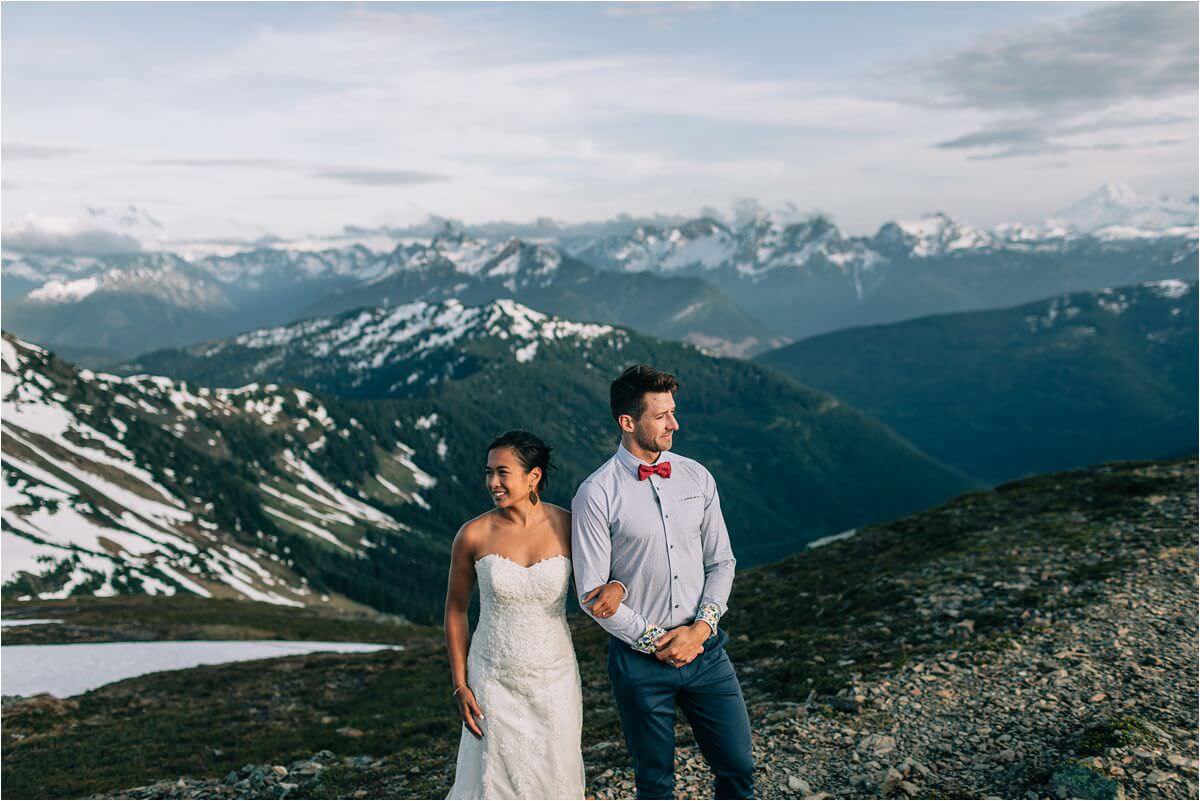 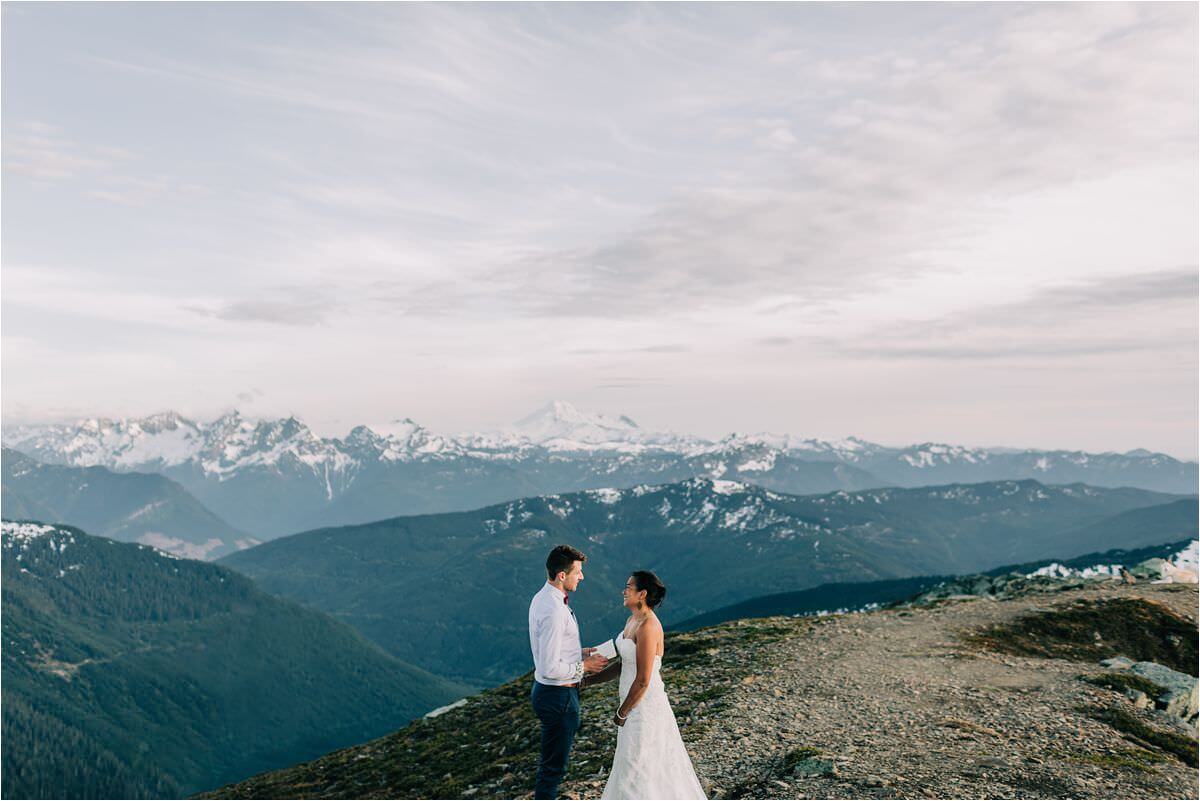 We set Scott and Karen up for a first look, let them have their moment and followed up with some portraits to get them comfortable in front of the cameras. Once all the giggles were out, we slowed things down and told them to just stop doing what they were doing, ignore us and take in the beautiful surroundings.

It was at this time that things got real and the emotions started flowing. We handed over their booklet and began documenting their vow renewals to each other. 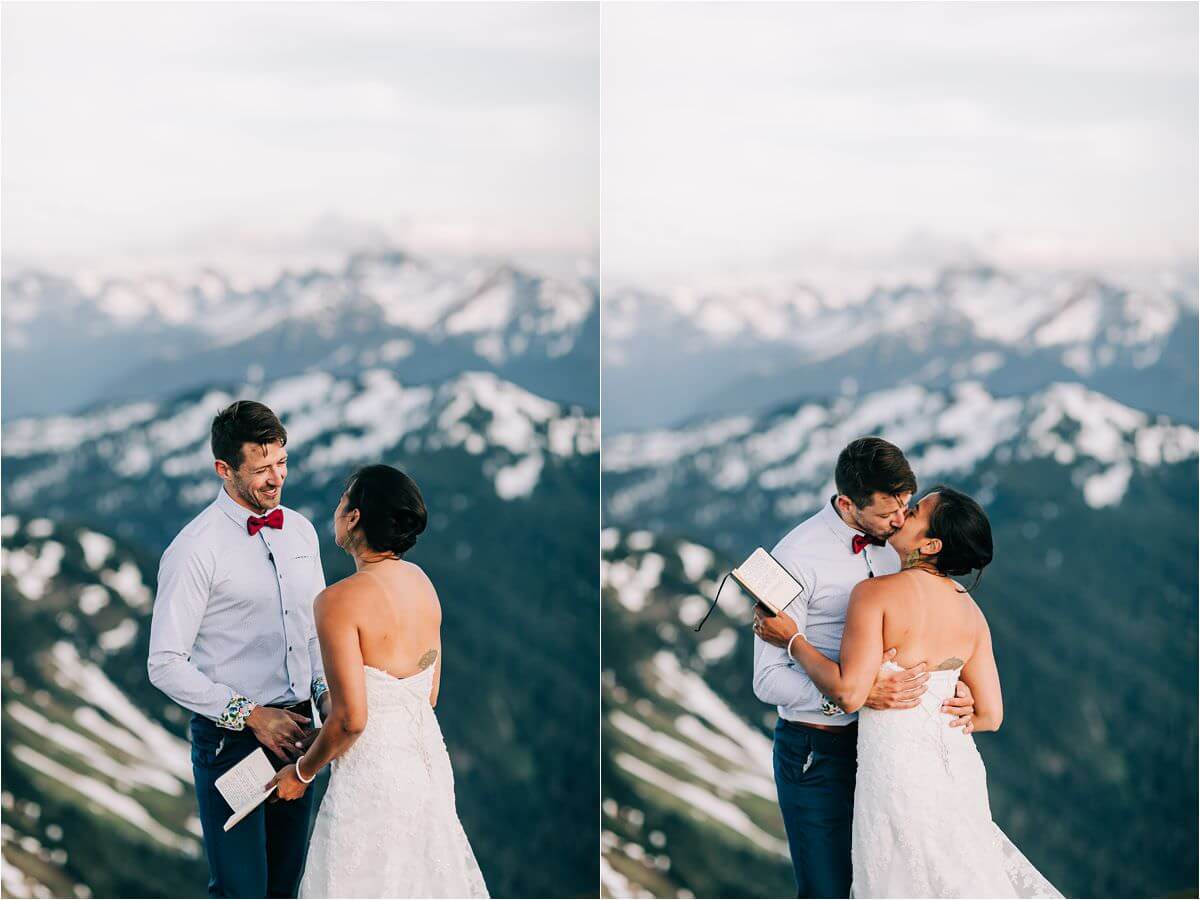 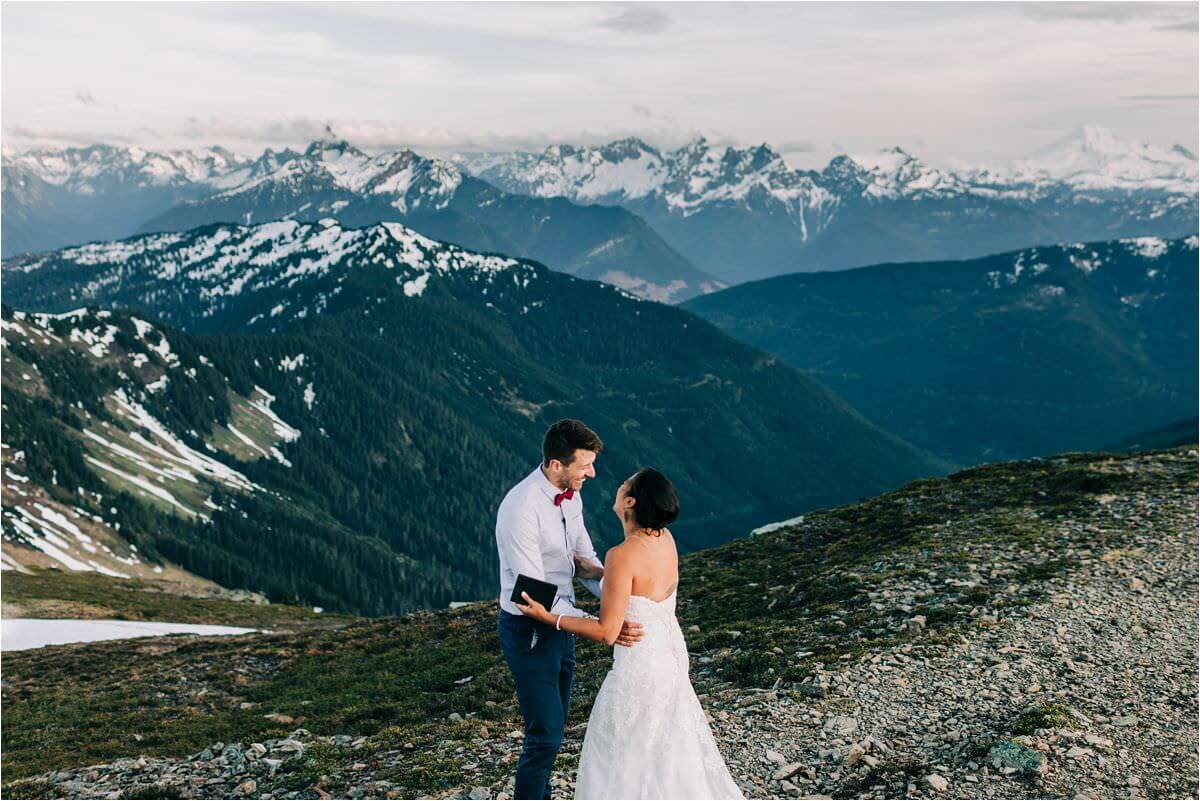 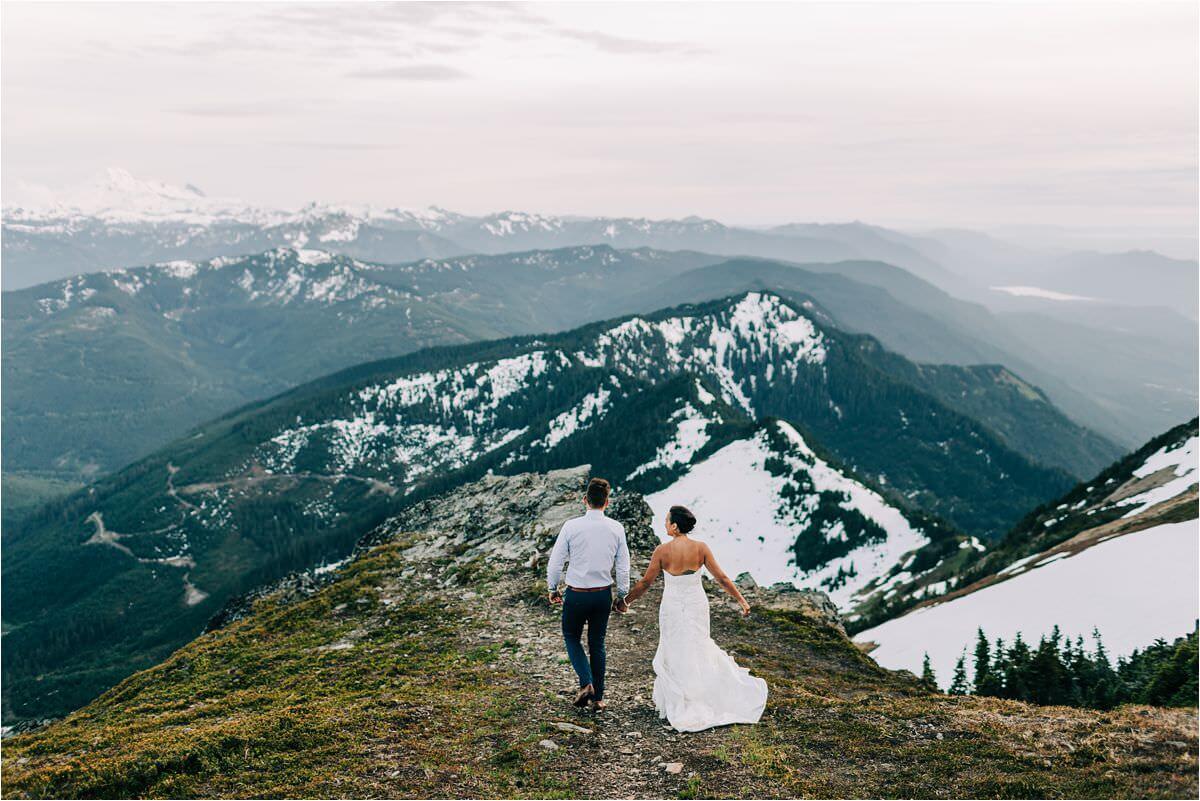 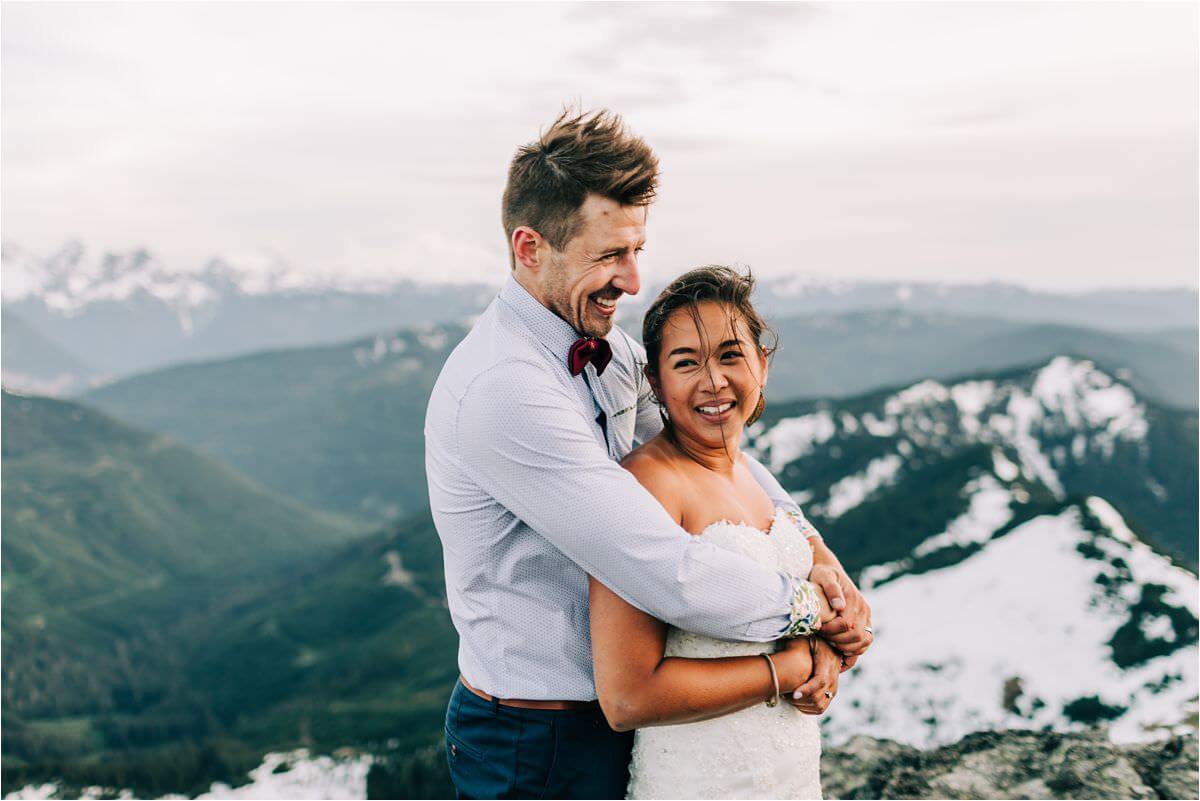 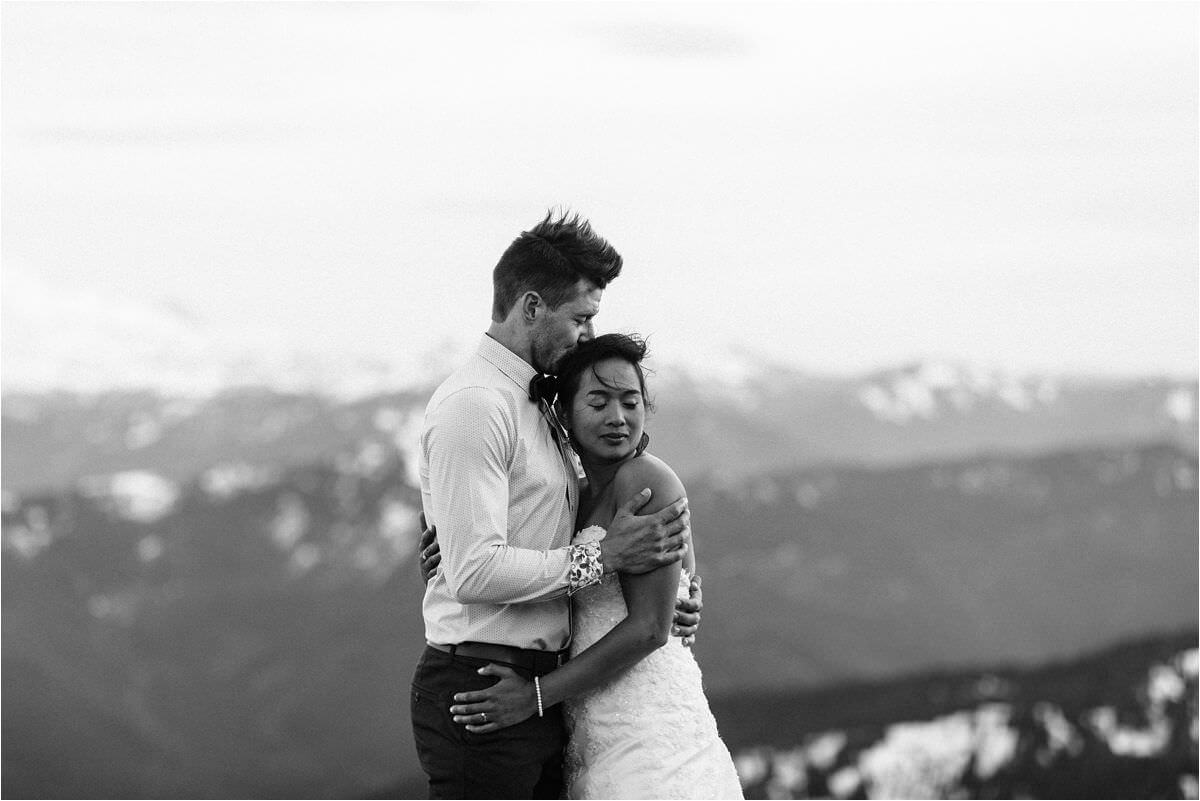 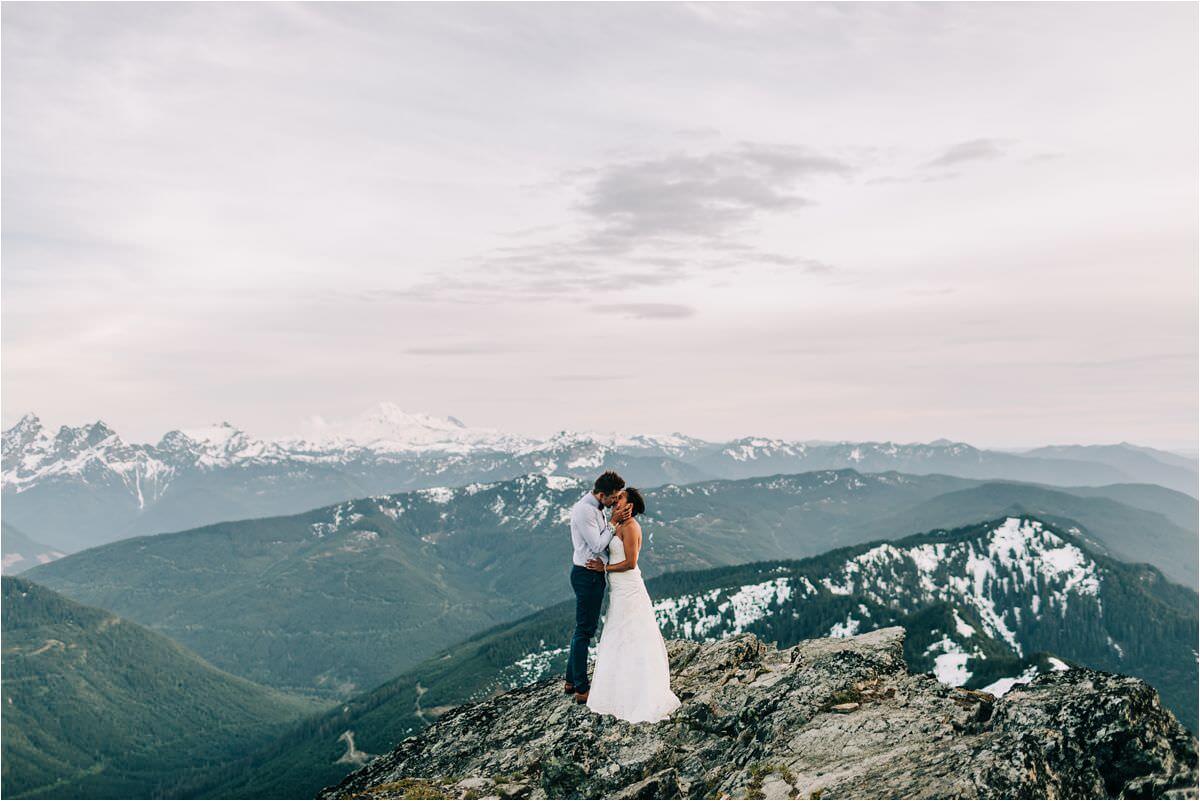 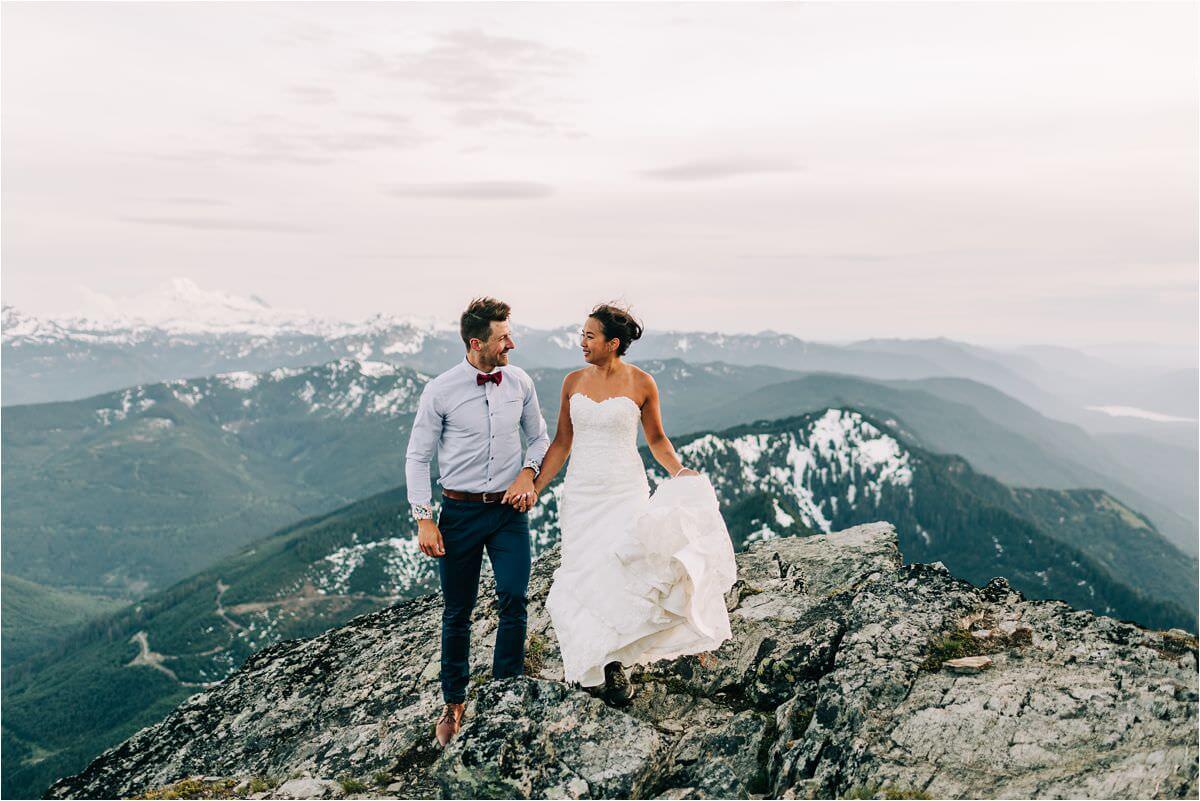 Karen & Scott, thank you so much for allowing us to document such a precious moment and bringing us along on this adventure. We had so much fun spending the day with you drinking beers, eating chips and sharing farts! Hahahaha!

“The past three years have been challenging, to say the least, and continues to be for the foreseeable future. Despite that, we do our best to continue adventuring and embracing the beauty and nature around us. We know that even though it’s been hard, we are still very lucky, especially to have each other.

Thank you to Justina and David for helping us to create a beautiful memory of one of those adventures. We knew we wanted to celebrate our five year wedding anniversary in the mountains, but we never imagined it would turn out like this. The day started off rough: the mountain was completely socked in, we were tired, cold, and losing hope with every hiker we spoke to on the way down. But as we made our final push the clouds cleared and made for an absolutely beautiful…albeit freezing cold setting. David and Justina you guys are troopers hauling all that photo gear up and running around like crazy trying to soak up every last ounce of magic hour light.

Scott and I aren’t necessarily the most lovey people and definitely aren’t ones for PDA…so even though the hiking conditions were a bit treacherous, the vows were actually the most nerve-wracking part of the day! Thanks for pushing us outside of our comfort zones guys (although I will note my full vows have not one, but two mentions of farts. Fair enough to not include that in the super romantic video hahah).

Sharing this beautiful video made by a talented duo. For those of you close to us, please don’t barf on us for being so cheesy”

Wow, Chilliwack is a gorgeous spot and this mountain top vow renewal is stunning!

Vow renewals are always my favorite, love the pups came along!

This is so beautiful. I’m so glad vow renewals are a thing!

I know, right?? I can’t wait for my wife and I to do something cool like this!

I can’t decide I love his cuffs, the mountains or their pups more. What a beautiful vow renewal!

How about the pups on the mountains!!?? Hahaha. It was so much fun and the dogs were SO tired after! They all zonked out in the tent and continued sleeping for two days at home.

Wow this so stunning! I love when couples do vow renewals!